The first pride was not just a riot, it was a queer uprising against police brutality and state violence led by trans women of color, working class queers, sex workers, and young people. What is pride, then, but a collective celebration of queer & trans resistance and rebellion in all its forms. This is the pride we choose to honor and celebrate.

This year, we take to the streets in solidarity with our queer and trans kin living in limbo in the asylum system, locked up in refugee camps.

The European Union is investing billions of euros in the name of safety, keeping people away, letting them drown, suffocate in containers, while also investing in abusive regimes that imprison, enslave and torture people at the periphery of their colonial and imperial sites of despair. Europe is constructed every day on the dying bodies of people trying o cross its borders.

The rise of the far right, their increase in power and platform to spew hate and homonationalistic rhetoric, has been mainstreaming hateful agendas in the public debates. We will not stand for the use of queer liberation politics to uphold the idea that Europe's safety is on the line, demonizing migrants and refugees, where they are scapegoated under an image of the dangerous "other". Our liberation will not be co opted by far right nationalism. We don't buy into the narrative of progress, it is old and it's been killing us for hundreds of years.

When it comes to LGBTQI+ rights, the Netherlands promotes itself as being progressive. Consecutive Dutch governments have been using for decades this 'tolerance' politik promoting pinkwashing images doing soft diplomacy and business on behalf of big corporations in many places around the world. They wrap their neocolonial structures and exploitation in rainbow flags, structures that have left lands uninhabitable and dignified life impossible all over the world, forcing people to flee their countries in search of a better life. 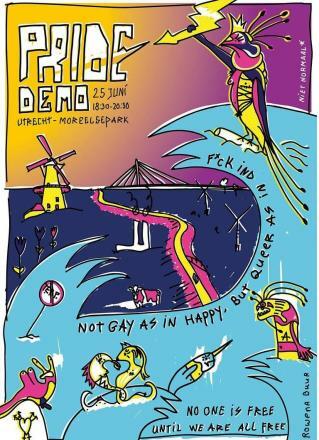